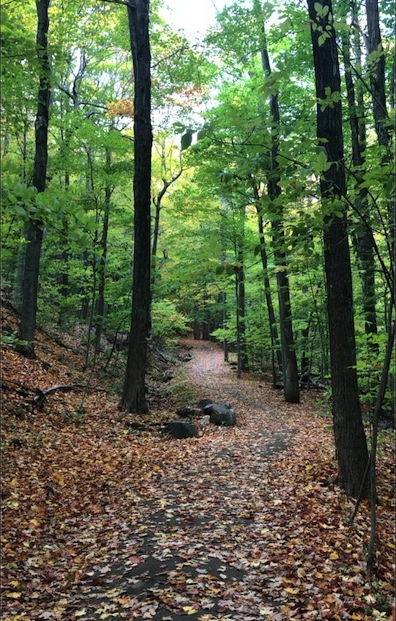 It occurred to me this morning while I was sitting at breakfast enjoying the “compote de pommes” that I had just “confectionné” that the annual pilgrimage that Carol and I made to the Gault Nature Reserve in St. Hilaire on Tuesday this week really made a nice melding of our parents family culture / the Ted Carol family culture / and the Québec culture.  If you like a good hike I encourage you to plan an outing to the Gault Nature reserve.  “Plan” this year means buying your tickets online before you get in your car and go as they are limiting the number of people in this large park known for its hiking trails by only allowing entry by reservation.  We arrived on a Tuesday at about 12:45pm and learned of this new policy but, fortunately there were still openings in the online ticket availability at 2pm.  So, I suggested to Carol that we take a leisurely lunch (I packed one to eat at the Dieppe trail summit) and return to do our hike at 2pm.   Pulling out of the entry to Gault, I turned left (not the usual right) and was happy to re-find my favourite spot for a “cueillette des pommes” on the side of the road with the orchards and only an apple’s throw away from Gault.  There, lined up against the driving shed wall were a half-dozen crates (bushel-size) of apples that had fallen to the grass-carpeted ground in perfect ripeness and were ready to be sold to country boys like me for $8.  The owner was busy somewhere else so I laid out my 10 $ bill inside the shed and took to gathering my crate’s worth into bags. Before I had much more than a large bag’s worth socked away in the car trunk the “vergière ” showed up and verified that, yes these apples were almost all Macintosh, because they mature earliest and her orchard is made up mostly of Macs and, no, it isn’t the best apple-pie apple because, well, they rather melt down into a compote texture with very little cooking.  But two things in my philosophy kept me gathering my bushel into bags: $8 for a bushel is a very good deal and the maxim, when life gives you lemons… yes, in this case make compote de pommes (apple sauce).

We had an apple tree in our backyard that snuggled in close behind the garage and every second year produced rather early in the summer an abundance of apples that were only good for applesauce .  So, before much of anything but strawberries were ready for harvesting our household set to work making applesauce.  Mom had an applesauce colander which allowed her to just quarter the apples, boil them skin on, seeds, cores and all and then run them through this colander, reversing the direction of the crank when the waste matter had built up too thickly, throwing the waste away allowing the sauce to continue flowing unimpeded by the skins.  When I got home from the hike at St. Hilaire I looked for this colander but it had been stored elsewhere as I had last used it 20 years ago.  So I peeled the apples with bruises (the ones that will be first to go bad), removed cores and set the fruit to steaming.  As my vergière friend had suggested, it only takes 3 or 4 minutes of good steam to soften a Mac to optimum compote conditions. 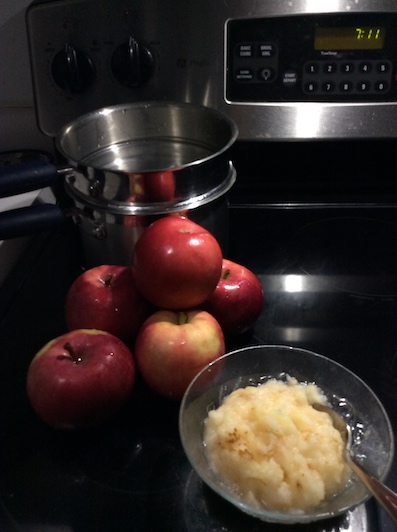 I dumped the steamer basket into a flat bottomed bowl and mashed the apples with my potato masher, sprinkling in a modicum of cinnamon.  Result: best applesauce that I have ever tasted!  The Macs are more tangy than my parent’s apples (which never pretended to be anything but an applesauce apple) and with the simplicity of making it, and the lack of hockey these days to make the first slice of apple pie special I may take my apple fix in a new way.

While I remember that my father had a sweet tooth that he indulged with candy in my childhood years, in his retirement years the candy dish was always ready to offer to the grandkids, but Dad’s nightly snack was nothing but an apple, and he took great pleasure in these.  My brother, Greg and I, when we had the occasion to be in Kitchener of a Saturday morning would encourage my father in his apple-love by going to market early, while the selection was at its best and choose a bushel of apples to split with Dad.  My father-in-law, in his Jamaica Mandeville home, was pleased that his daughter, Carol, had found a good-hearted, sensible man who knew that the only thing that Mr. Bernard really desired that his Jamaican soil could not produce for him was an apple pie made from good Canadian apples.  One of the only times I have ever fudged a customs declaration upon entry to Jamaica was when I imported a ready-made pie and the apples with which to make another.  In the days to come, when God brings forth a new heaven and a new earth I shall hike to the Dieppe summit at Gault with my two fathers and tell stories of the roads we have walked in this world.  As we sit down on the rock face overlooking a re-created Beloeil and watch the mist rise from the Richelieu river we will, the three of us – father, son and beau-père crunch down on a tangy Macintosh.  God is good!