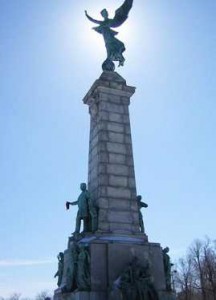 With each additional year, I feel like I should fill out my timeline as there is presently a big gap between my L-d-V birthday and my real-time birthday that should really be documented. I’ll find pictures that are year appropriate.  Project duly noted.

The monument pictured to the right is in honour of Georges-Etienne Cartier, well enough known in Québec but in the ROC he enters history as John A. Macdonald’s ally.  Without M. G-E Cartier, Canada would .not exist in the form we know it.  The monument is in Jeanne-Mance park (or is that part of Parc Mont-Royal?).  When I begin skiing, bicycling, running or walking up Olmstead Way into Parc Mont-Royal I pass before (or behind) this monument.  Let’s say the angel guards the entrance to Olmstead Way.  It happens that this monument was erected in 1919, my L-d-V birth year.  It was recently restored at the cost of millions, which is quite understandable for a 96 year old.  There is a fantastic view of the monument when you are coming up the bike path in Jeanne-Mance park from Rachel.  This photo gives angel-appropriate back-lighting to the monument.  It is a stunning monument from any angle at any time of day. 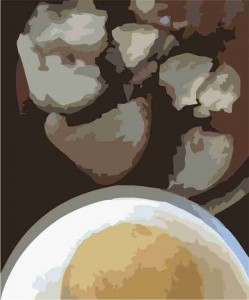 I’m on a mission to use up well-intended purchases that have been relegated to the pantry (canned and dried goods – you know, flour, beans, soup barley, pasta) for too many years.

If this mission gets interesting I’ll write about it.

It would be rare for me to pass by the Milton Street Book shop on my way home on foot without at least a one minute glance at the books  that are clearing at 50 cents each on the exterior window sill.  If this used book shop is successful, and they have remained in business while many other book shops have not, it may be partly attributed to the siren’s call of these quality 50 cent offerings. 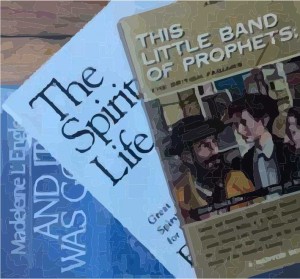 Today I heeded the call of two books with a spiritual bent and one that excited my interest in history – a paperback history of the early Fabians in Britain.  It may always be best to buy used books on subjects that touch the spiritual life as if the ideas are new and in fashion they may not stand the test of time.  Why feed your ever-living soul something that has less than a 20 year time span?

Once in the store to pay my coin to the book-loving minder of the till, I browse the pricier yet still quite affordable selections.  I consider Robert Frost (The Complete Works) while reading “Christmas Trees” a poem he wrote as a Christmas circular letter sent out to friends.  I could take captive his complete works for only $10 and put it on my bookshelf at home (although there would be an opportunity cost – another book replaced – as there is no room left in the inn).  Then I look to see if there any books by my 1st year university English teacher’s favourite poet, except I can’t recall the poet’s name so I browse the whole poetry section (in vain) for the Jesuit poet who gave glory to God for dappled things.  Google those last 6 words and you’ll find the rich, rich poetry of Gerald Manley Hopkins.  Meant to be read aloud his poetry was never published during his lifetime (and still he wrote, for the glory of God).

So, finally I leave the gas-heater warmth of my favourite book shop with $1.50 worth of books in my clutch.  If I put these three books immediately on my reading list along with another 3 to 6 books already begun I would not need to return to the Super Library before June.  Selah.

Read the exciting conclusion to this blog about used books at dettweiler.ca/wp sometime before the end of June.

An iPad is just the perfect platform for Scrabble. I play a few too many games, although, according to my official stats I have completed just under 360 games in a little less than 3 years, so that is only one game completed every 3 days. Not excessive, at that rate. 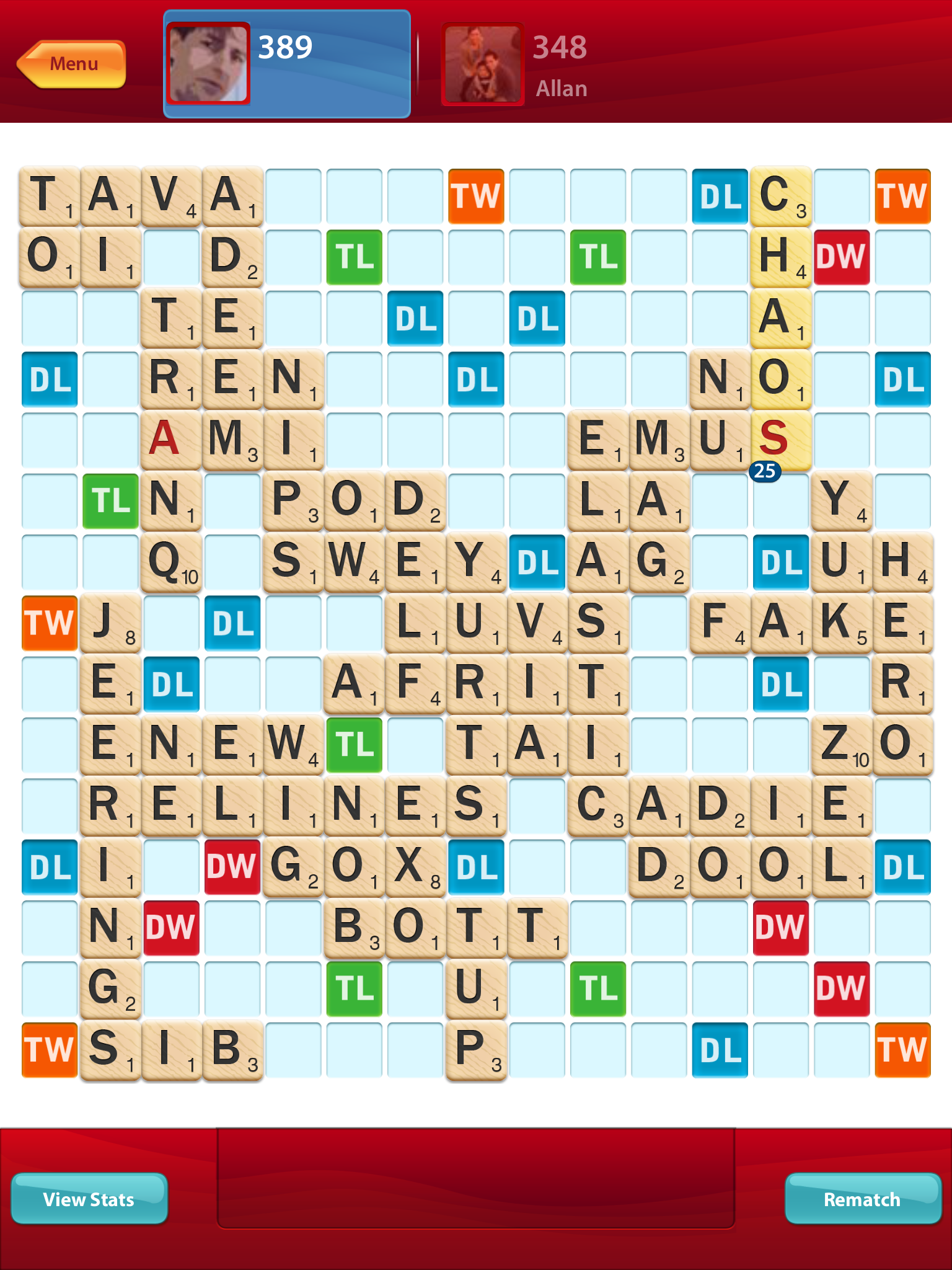 This is the latest game I played against a player who WAY outclassed me in Elo rating. I went into the game with 1684 points. Not so bad – I win 2/3 of my games. My opponent wins 93% of his games and at the start of our game had an Elo rating almost 500 points greater than mine.

For sure I was thinking, play defence. I was fortunate to get letters that could be worked to Scrabble words (like an ING combination and an S at the same time so that I could easily hang my Scrabble word. As for the big letters, he had Q and J; I had Z and X. I climbed aboard his JEER with my ING combo. He had his Scrabble RELINES early in the game. I was right around having a Scrabble for a few turns before I made ELASTIC (hung by the S on LUV).

So I was keeping up and I was fortunate to take the lead with my 3rd from last word BOTT, ditch only two letters next with TUP (maybe lulling him into thinking he had time), and then finish all the while holding my lead with CHAOS (nothing like a blank toward the end).

This game was a Speed Play game, which means that your timer runs out after 2 minutes per word played. This can make for a fast game – there is no pausing play at all. Unfortunately they do allow a 2 minute extension meaning that players can take up to 4 minutes per word played without defaulting to the opponent. If a game went 18 rounds and each player took the max time for each word played that would make for an almost 2 1/2 hour game. That’s really TOO much time to be called “Speed Play”.

Right before playing my final game-clinching word I used the chat function to tell my opponent that I would not be accepting a rematch as, “there is no way I’m going to beat you twice”. I hope he felt complimented. I took the 30 point boost to my Elo rating and will sit pretty on that for a while. 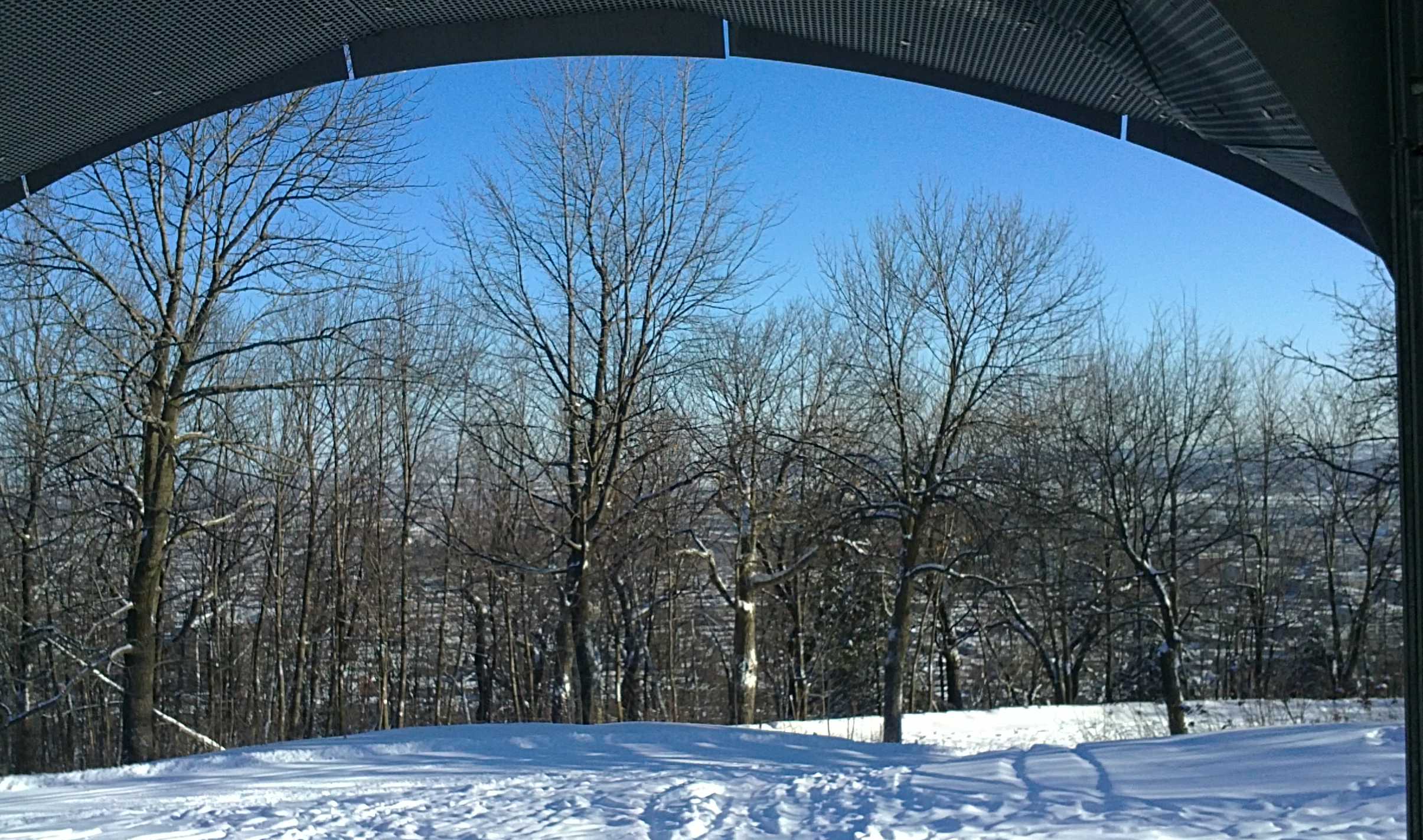 When winter weather reports talk about ‘miserable’ weather, snow storms and adverse conditions, it is all so much given a negative slant.  The real disaster for me is never ‘more snow’ but rather when the snow gets soggy and rain falls to destroy it.  We get less of those mid-winter thaws in Montreal – a good thing in my books.  New snowfall means I’m out skiing – a run up Mount Royal – in the company of so many other joggers, skiers, snowshoe-ers, tobogannists and dog-walkers – the cream of Montreal society.  Hang with the positive people.  Let the car-driving commuters commiserate sourly about the weather – I’m among those that know what to do with snow. 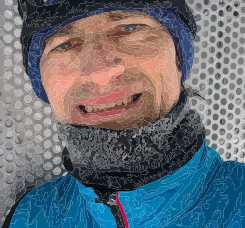 Felt quite stiff in the bones after a hard-day’s work packaging sausage yesterday, but I followed through on the previous night’s good intentions of going up-mountain and got out of the house before 8am for the couple blocks walk to the park where I put on my skis and rejoin (I think this is a French usage) the ski-trail along Olmstead Way.   I can see the elevation that I am going to climb, but the grade on Olmstead Way makes it the best of X-country skiing experiences. In about an hour I’m at the cross – la meillure oeuvre de la Société Saint-Jean-Baptiste, érigé en 1924.  This is the best place to take my small collation (snack).  This morning it is half a dried fig and the water that is left in my small water bottle.  Whether it is nuts, chocolate, raisins, dried blueberries or cranberries nothing ever tastes so good and yet just a bit is all I need.

Ready to put your beauty on display,
parading your greatness,
And the great things you do–
God, you’re the one, there’s no one but you!