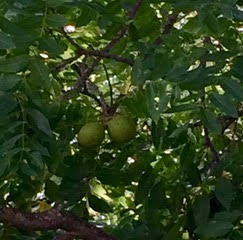 I have a memory from my youth where my dad took a paper bag of black walnuts and we went down to the workbench in the basement and left the bag there for them to dry out. Later on (months?) we might have used the bench vise, though I’m not sure we had one of those in my childhood years, so, more likely we used a hammer, and cracked those hard nuts open to get at the nut meats. That was my first taste of a nut that my dad knew from his childhood.  The Isaiah Dettweiler house had a large, impressive specimen of a black walnut tree between the house and the road.

In the nut world, the walnut that most of us have tasted is known more specifically as a Persian walnut. An ordinary nutcracker like the ones we used in our house to crack open walnuts, brazil nuts and hazel nuts around Christmas time is an adequate tool with which to get at the nutmeats in these nuts. But don’t think for a moment of using that nutcracker on a black walnut (“you daresn’t do that” as Dad might say).  This is a nut that is so solidly encased in its shell that you will break your nutcracker very quickly rather than break into the nut. 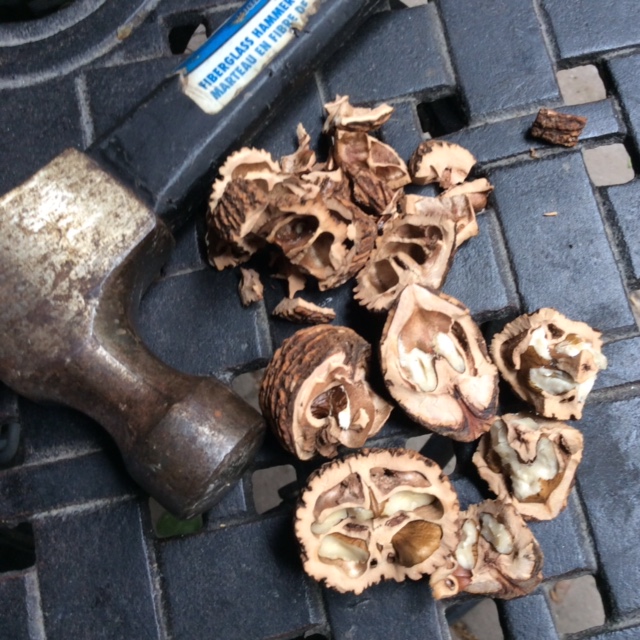 And yet my dad must have liked black walnuts for he knew the work involved to get at that nutmeats and he showed me how it was done. Later on, when I must have been a teenager, he planted at least two black walnut trees on his own property even though I have doubts that he ever came to enjoy the fruits of this labour.

To me now, in the 21st century, I pull out the hammer and crack into this hard-won treat every once-in-a-while as a remembrance of my dad. Unlike my dad, I can enjoy the unique taste that the black walnut holds without doing all the work involved. (This is a nut with an outer husk as well, and truth be told, I know nothing about how to get past this level except I think I remember dad (or mom) saying how these husks can stain your hands in the process of removing them). I have a sausage customer in Niagara-on-the-Lake that has a nut nursery and in the garage on their property they sell nuts that they grow, including the black walnut. I remember that when I broke into the plastic bag of pre-shelled black walnuts which I had just purchased ($14 per lb.) on the first delivery of sausage that I made to Ernie Grimo, the taste took me immediately back to my childhood when my dad had me share in this favourite nut of his.

If I come at this memory on a Sunday, it is not to say the obvious truth that everything is easier “nowadays”. There are some things that I think must be harder to accomplish today, like having families that give the children the sense of security in the world that my parents produced in their children. My grandfather, Isaiah, who I never really knew very much as he died when I was only a boy, was known, I’ve heard say, for his work ethic. Hardly a theoretical thing, to him, the farm demanded work. I’ve heard one of my aunts or uncles relating that when he sat at the table for lunch his one leg wasn’t with the other, in front of his chair or bench. He kept that one leg ready to pull off for a quick exit from the table as soon as he was done eating. Dad knew a somewhat easier life than this constant work and Dad’s favourite thing was to sit around the table with his family (after a hard day’s work) and to enjoy Mom’s cooking all together with his family. 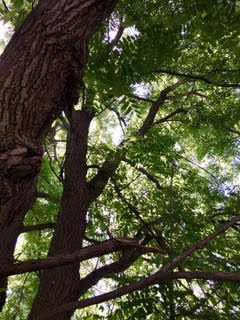 Dad liked black walnut trees and planted some on his own property because they were a symbol to him of something he wanted to pass on to his children. That was the tree that held prominence at the house where Dad grew up and I can only believe that Dad valued his upbringing and would want to remember it. The work involved to get at the nutmeats said that there is something very good at the end of working hard especially if it is something that you can share with the others in your family. Dad knew what he was doing when he put away that bag of walnuts for a future time and he wanted his children to know this valuable truth too.