I thought that this competitor’s sausage, since they add preservative (sodium nitrate) and anti-oxidants (sodium erythorbate and ascorbic acid), would be sort of cured meat-like (hammy) and would go well with the sauerkraut and potatoes that I had available. 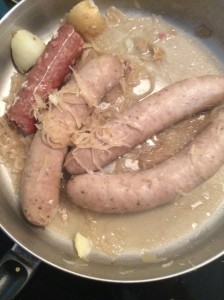 I cooked them all up in the same pan (see photo) and when the steaming had gone 5 or 8 minutes I laid the sauerkraut and already cooked potatoes on top to steam warm (et mijoter un peu avec les saucisses).

Whenever I cook up the sausage with sauerkraut and potatoes like this I feel very tête-carée Alemagnic.  It’s a meal my dad would enjoy, and well, I am my father’s son.

That’s about as far as I’ll go in today’s blog, as I really only wanted to share the joy of my lunch and to celebrate the mere fact that I enjoy a lunch like this. 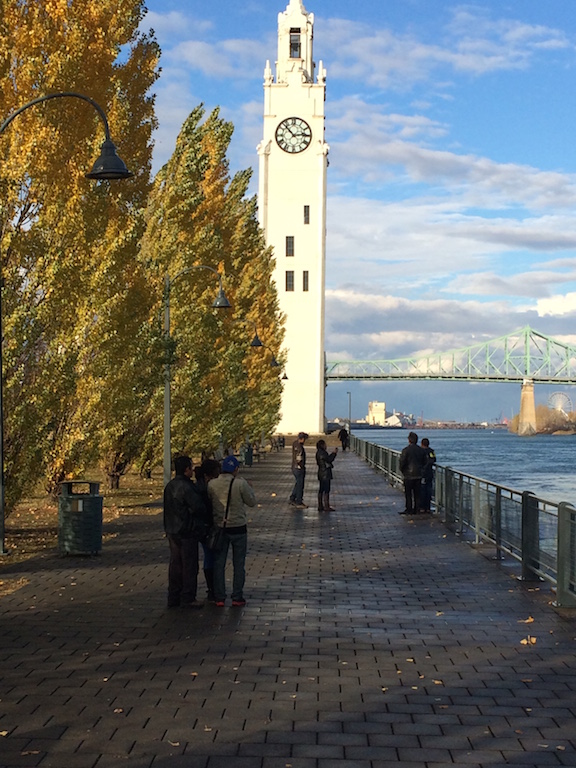 There are many things that I do impulsively.  Go for a walk in my beautiful city….uh, … ok, I can’t think of enough to make a list of three, but today, I almost did something quite impulsive, and what was more astounding, I had the support of my wife!

I’ll get to the catalyst for this blog – tell you what I came about doing impulsively – but before that, let me tell you that the catalyst for these impulse moves, as I’m sitting at my desk (at home, as in home office) is often email.  I am party to 1,000 too many emailing lists and when the Hotwire email opened today featuring a Montreal downtown west 4.5 star hotel for a new low price, I thought impulsively “I’ve got to invite out-of-town friends to visit Montreal because there is so much happening right now – this coming weekend – with breathing space until X-mas”  While you are impulsively in-town this weekend I might suggest that you come to see and hear the two one-of-a-kind choirs perform at the type of church they used to build – with windows, vaulted ceilings, balconies, massive organ – I’m selling the One15 concert, of course – see montrealgospel for tickets.  So that is your tangible excuse to do something impulsive on a Wednesday evening – you’ve never seen Ted and Carol and their Jireh Gospel choir or Montreal Gospel choir perform & now because someone encouraged you to be impulsive you’re going to up and do a road trip and take it all in.  I’d tell you other reasons to come to Montreal – shopping before Christmas, restaurants – OK that’s plenty enough – oh and one of the hotels that has a deal this week is approved by 95% of the people who stayed there (an amazing rating) and is in Old Montreal.

Back to my impulsive move this morning.  I was going over my itinerary for my previously-planned Jamaica getaway before X-mas with Carol and she suggested that maybe we should stay longer and see family and friends that are there.  Riding from Negril to Mandeville, maybe driving on the wrong side of the road, shifting gears with the left hand – yeah, I was up for it – so this is what happened.  I went to one of my favourite travel-booking engines and entered a date – Christmas day – that was likely to yield the best possible low fare for a one way ticket from Kingston, JA to Toronto, ON.  Up popped Caribbean Airlines (who don’t charge for baggage, because that would be unfriendly) and a fare that was so low in American dollars and even very-very good in Canadian currency. A fare so low that if left my return ticket airline in a lurch on December 22 because I didn’t show up at MBJ to take my return flight to YULand well, they’d understand.  I was visiting KINfolk of Carol’s who I like just fine as well and driving the roads of Jamaica listening to the opinion radio (they do more than “talk” there) and remembering Mr. & Mrs. Bernard and life there that is gone, but memories that last.

YES, sure I would be a little late for Christmas in Canada, but that’s why they make boxing day a holiday as well here – more time to see everyone – and after boxing day it is Sunday, too.

WE SHOULD HAVE BOUGHT THOSE TICKETS! But we didn’t, what Carol started by saying “we should stay longer and visit family in Manchester parish” she effectively finished with love, this way: “We can book tickets in the summer (I’m thinking June (too soon for hurricane)) when they will be cheap again – we’ll plan it out and do it right”

I love this girl. Let that and our plans for Jamaica for a week in June 2016 now be officially known.  The first time I saw Jamaica, it was June and I loved the heat and especially the humidity then.

Let me know of your impulsive plans for Montreal, the 12 & 13 of December, 2015.  I have a lonely blank beside my name on the guest list and I would be happy to accomodate your name, friend, with one complimentary ticket.