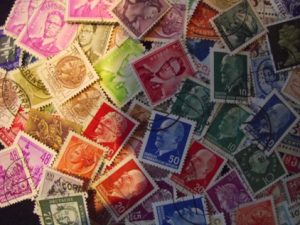 The impulse to collect stamps is labelled “philately”.  Between the ages of ~9 years old and 15, I possessed that rather solitary passion and it might be a major contributing factor in the development of my adventurous nature.  That need to explore goes hand in hand with a lack of fear of the unknown, in my case, and it brought me to Montreal, ideal home for adventurers…, and stamp collectors as I discovered today.

A small ad in a paper that I read rather assiduously led me to exup 42, which I suppose can only be the 42nd Exposition of the Union des philatélistes.  The ad promised both free entry and free parking, but I took the scenic route by bus along Jean Talon this morning and walked up to the second floor of the Maison  du Citoyen in Villeray – St. Michel – Parc Extension fashionably just after the 10am opening.

After a few words of counsel from the Union people, I was directed away from the merchants and into the Bourse des timbres à 10c de l’UPM.  Taking my seat with the other early birds, I introduced myself, “Mon nom est Ted et je suis une philatéliste”.  I blague (I’m joking).  It was more of a square than a circle, due to the tables in front of us.  In the middle of the room were other tables piled with hundreds of albums holding what the UPM volunteer described as “surplus stamps that their members were willing to sell at 10 cents each”. I had the full extent of my circa 1975 stamp collection along with me, and since there were some stamps that I lacked in a “World of Sports”” stamp album from the USPS.  I started by looking at “thematique” albums which contained various – boats, bridges, flowers, animals and, not least, sports”.  Soon I was lost in the beauty of stamps, filling out a dim sum-like summary of my purchases. 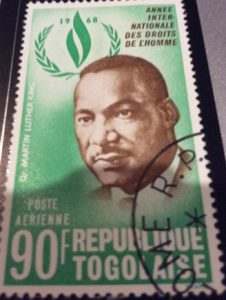 After a slow browse through 4 or 5 thematic albums, I was getting the hang of the system and decided that I would follow up on a recent read of a sort of autobiography of Martin Luther King, Jr. starting with stamps from Africa honouring him.  The albums of African countries, from North to South, Angola to Zanzibar piled before me failed to yield up a single Martin Luther King stamp, though I remember reading that he did travel there.  Finally in the Togo Republic, I found the civil rights hero’s image on a stamp.  I know the obvious is to look for MLK in USA, but since presidents and prime ministers like John F. Kennedy and Winston Churchill can be found everywhere in the stamps of the world, I expected the same for this martyred civil rights hero.  Not the case.

The take home for me, besides a selection of stamps that I can use to illustrate future blogs on a variety of topics touching history or geography, is that there are people like me whose interest in stamps is not about rarity or even the collecting impulse but who see stamps as a “trampoline au monde entier”…, and a good conversation starter.  J’ai côtoyé du monde fort engageant aujourd’hui et c’est pas le monde des timbres, mais le monde des philatélistes.