Link to Pages formatted version of Engagement in the woods

This George Foreman-like grill earns a place among the limited under-counter space we have because it cooks sausages, makes grilled cheese, and as of today is a raclette-grill.  Portability means it can be used to prepare lunch on the patio.  Genius. 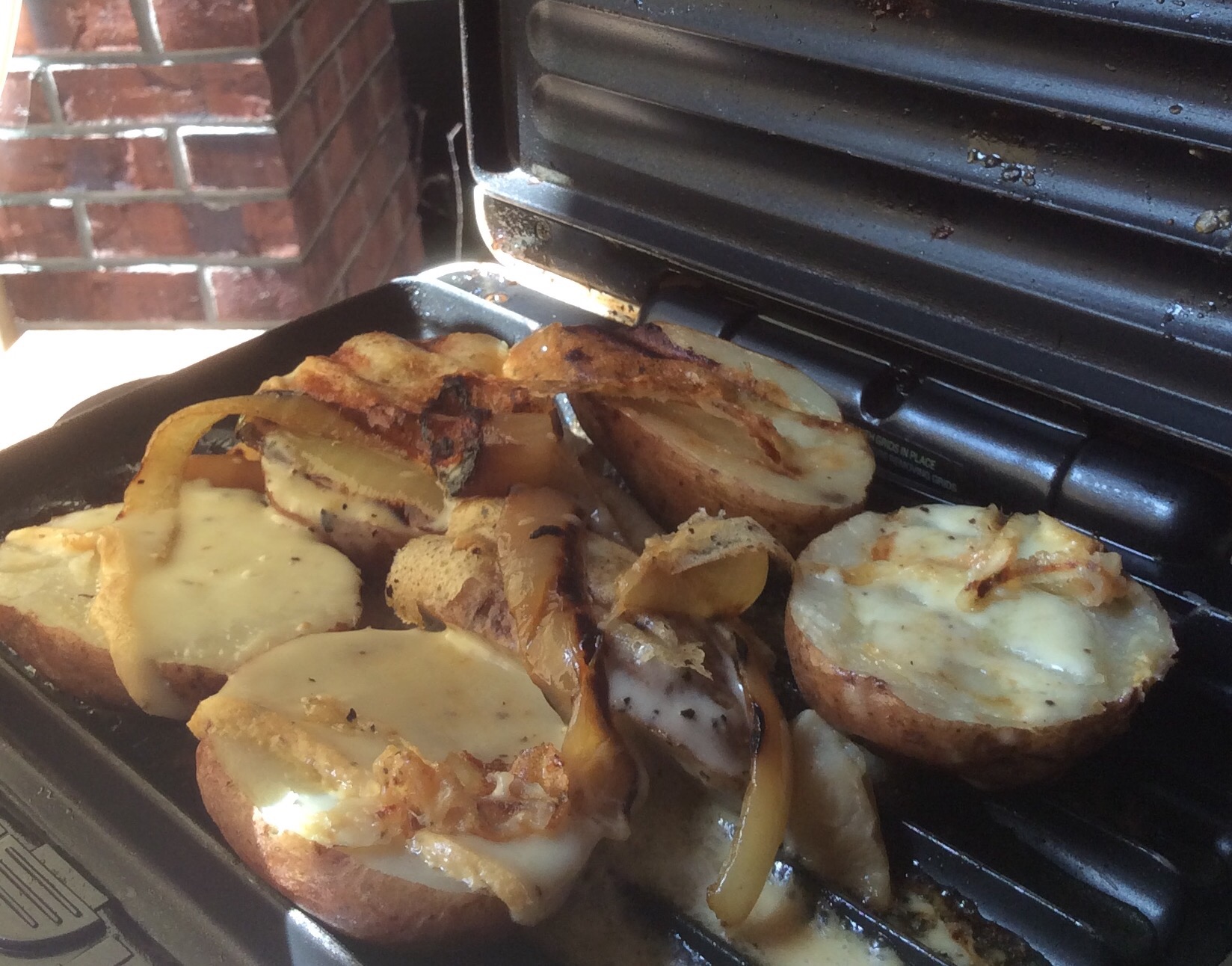 While slicing a dried Portuguese roll today at lunch I had this look-on-the-sunny-side thought:  the definitive way to brighten up the prospects of dried bread is to read Solzenitsyn’s “A Day in the Life of Ivan Denisovich”.  Make soup and put some beef in it and you’ll know you’re not in the Gulag.

Considering that there hasn’t been much activity on my blog for the past 6 months or more, I decided that today, Saturday June 18, 2016 I would rectify that by committing to writing a weekly instalment on my blog until death do me part.  How hard could that possibly be?  I guess we’ll see.  I’ll address that question “How much self-discipline does it take to follow up on a weekly commitment?” on instalment 35 (which falls on a slow week February 12, 2017). 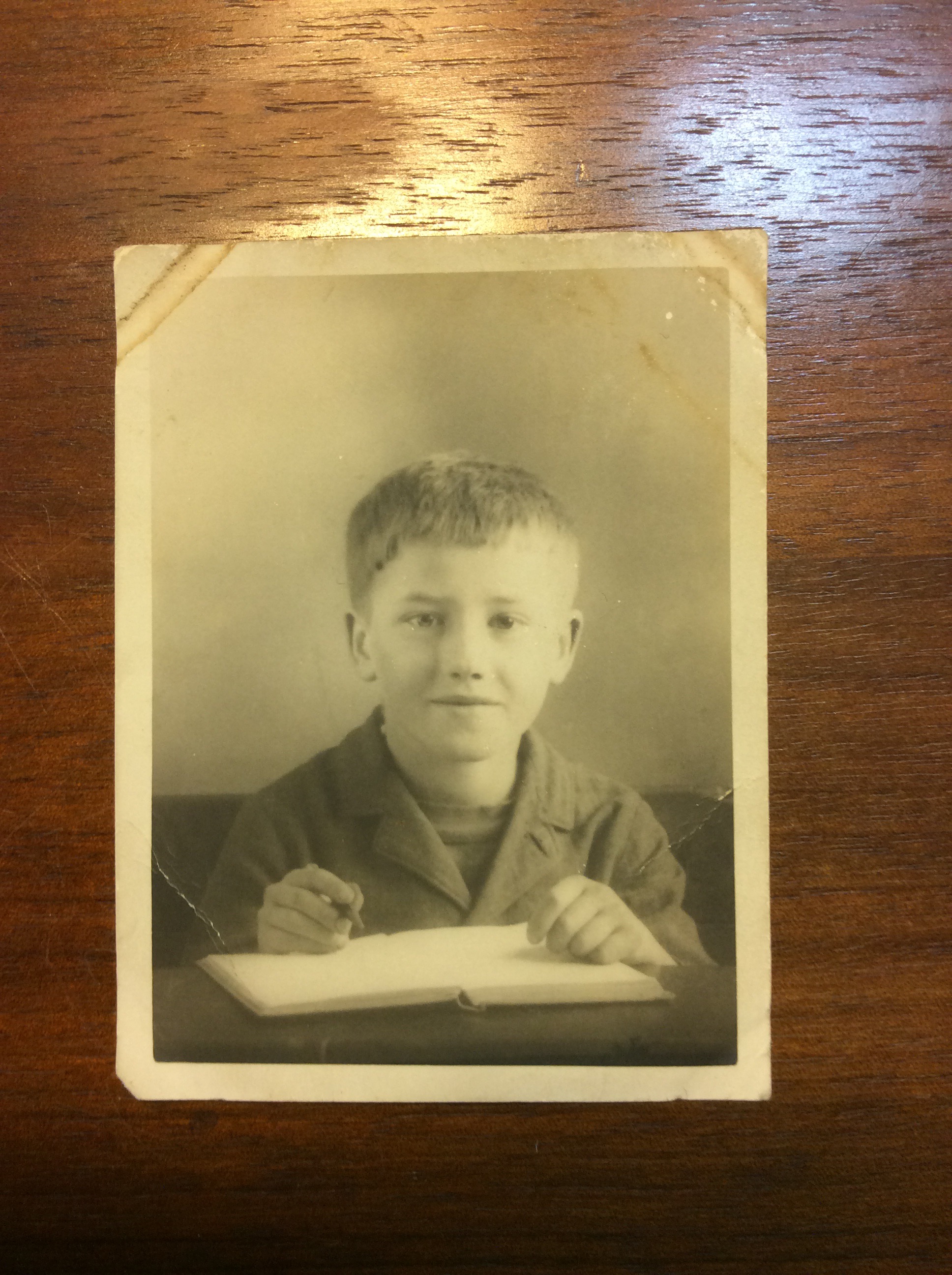 Tomorrow, the first week of my Ted Sunday blog, is Father’s Day.  I didn’t consider this soon enough to send him a card by Canada Post, but I inherited writing from my mother, who would be a famous writer like Lucy Maud Montgomery but for her 6 kids, so consider this a sort of e-card.

I love, love, love this photo of my father taken sometime in the midst of his academic career which ended quite satisfactorily to both him and the educational authorities in 1936.

I think I would say that my dad is from another era.  Born under the reign of King George V (the stutterer’s father, if you’ve seen the movie), this photo was likely taken shortly before Franklin Roosevelt began his first term of office as President of the U.S.  So that’s what might be on the news, on the radio at the end of a school day, if dad’s Mennonite family even had that worldly technology at the beginning of the depression ’30s.  If they weren’t radio-informed, then news, unless it was monumental, came out in weekly doses, I suppose.  Hmm, I wonder how that worked?

Our post-modern, social media era has a killer checking out what social media is saying about him while in the midst of the on-slaught.  [Please skip this line, dad, it’s not a very pleasant thought to dwell on.]

Dad’s aunt made the clothes he is wearing in this photo.  That was her specialty. Being the oldest boy of four boys in the family, these clothes are going to be in your younger brother’s school photo, too, Dad.  Please consider that when you’re out wrestling the other boys in the school yard.

In my family, I would never be one to downplay the importance of higher education. When I was met by my father as I was crossing the road from the school bus, his words would usually be “if you don’t have something better to do, I could use your help in the butcher shop for an hour or two”.  If I said that I was all full-up with homework assignments, that would be the only legitimate out for me.  My two hours worth of work before our religiously-respected 6pm family supper time?  Writing with magic marker “soup bone, T-bone stk, rump rst…” on butcher-paper-wrapped packages bound for the freezer.  This way, Albert Martin, the regular help, could wrap faster. Or somewhere past 10 years-old, I suppose I had the sufficient education to wrap in an economic, airtight manner and Albert could bone meat for hamburger.

My dad was a businessman, which meant mostly that he worked for himself, answering only to Mom, who was not allowed in my dad’s domaine, the shop, in interest of household harmony.  I still have his desk which was not in the shop, but in the former-kitchen in our house which was converted to hallway, laundry room and closets.  On Saturdays my dad would use his adding machine (no portable calculators back then) to add up the sales that he had entered on his adding machine in the shop (the blue machine – I guess it was portable, Dad carried it in from the shop).  Then he would write the totals in his ledger book.  The desk, which had an ink blotter on top that you could tuck receipts into both sides keeping your desktop relatively neat and orderly, had just the required space for the blotter and the adding machine.  I keep a Mac mini on it now, and sometimes the laptop, and there is usually a mess of receipts all disorderly-like ’cause I lack the blotter’s imposed order.  But it is something of my dad that lives on with me.

I’m still making sausage, dad. It takes just a little bit longer than it takes me to write a once-a-week blog.

I hope you’re having a happy Father’s Day, as I sit here happily having a blessed-son’s day. I’ll never have a skewed image of God because I have your model of what a Father is.