…with or without my help. 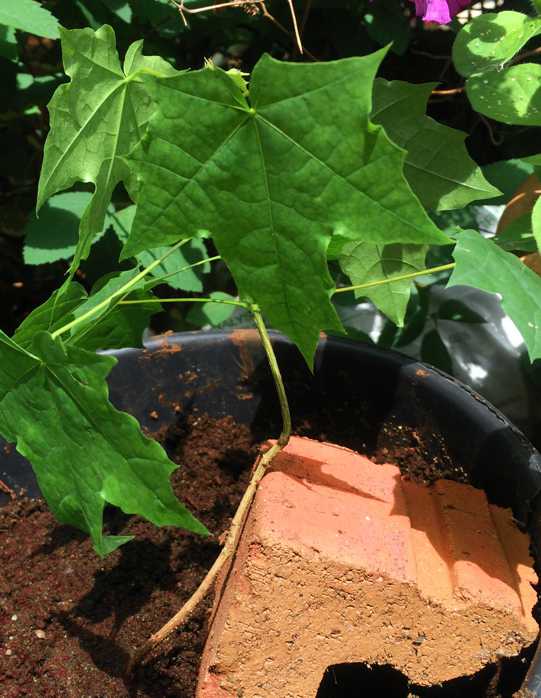 Much of my garden work (serenity therapy) in the spring season involves taking the life that is already happening and arranging it so that it might have a future.  So far in May / June 2015 I have moved around plenty of sweet pea and today I played God with a maple seedling which had established itself in the wrong neighbourhood.  My street is lined with maples and all the cars, sidewalks and fertile soil that happens to fall under those maple branches were littered with billions (my block alone must account for millions) of maple keys.  Some windy day brought keys into the in-ground planter in my back terrace that the wall-climbing vine happens to draw life from.  It’s not a spot that has resources to expend on anything other than said vine, but the maple sapling that sprang into life here had already 8 fully-developed leaves balanced above its crooked trunk before I took notice of it.  I imagined a future for it, but certainly not there – a mere 4 inches from the brick wall.   I called into service a rather large pail, cut some drainage holes in the bottom, got a spade under the still compact root ball and introduced the maple to its new interim home.

I don’t have a history of tree-sapling transplantation, but my father, while he owned his two acres of Waterloo Township (to become South Woolwich eventually) transplanted many maples, many pines, willows, fruit trees and a black walnut tree or two.  He loves elderberries and I believe he even imported a bush or two to grow at the edge of the backyard swamp, hoping that he would enjoy better access to his beloved pie-berries.  I seem to remember that the elderberry bush took in the damp soil there, but no person was fortunate enough to enjoy the wild fruits as the sometimes pond / swamp neighbourhood was the delight of many birds and one or more of those species enjoyed the elderberries while they were still green.  By the way, happy father’s day 2015, dad!  I’ll be calling you before supper tonight and comparing my elderberry memories with yours.

This spring I’ve been transplanting like never before.  It’s been 5 or 6 years since I planted my first dollar-store 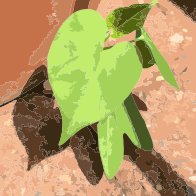 packet of sweet pea seeds.  Since then I’ve been reaping dividends on that investment as the vines which climb the fence bordering my planters hold their seed pods through the winter and then self-seed the following year. Last year McGill put up a huge trellised barrier between the driveway running past my garden and the little-used terrace area of the student residence.  My imagination soon populated the barrier with the surplus sweet pea plants that literally sprang up out of the cracks between paving stones, but the reality that I had to overcome was that, on the McGill side, there was 12 inches of concrete at the base of the trellis and on my side there was the driveway and then 30 inches of concrete before the trellis structure began.  I called into action some discarded corrugated plastic drainage pipe which I cut open and tucked one side between the top of the concrete and the bottom of the trellis.  This hanging planter could hold plenty of soil for the sweet pea vines that I foresaw taking over this huge trellised square footage.  The trellis panels, all greenish-yellow treated wood, were not entirely an eyesore, but the sweat peas, if they could wind their way up and eventually dominate the structure, would definitely improve upon my terrace view.  I succeeded in this plan to a small extent, but the drainage-pipe planters didn’t hold up so well and soon looked shabby so I’ve decided to take a different tack this second year.  It involves a bit of guerrilla gardening as I am placing small planters sitting on the 12 inches of concrete on the McGill side of the wall.  I see that the sprinkler hose has been set up by McGill (not in use yet due to almost daily rain this spring) so my vines, still crouched at the bottom of the trellis wall will enjoy consistent watering through the heat of the summer.  Some of the candidate sweet pea vines that I am using to conquer McGill’s wall sprang from seeds that took root between the paving stones on my garden terrace.  Left alone these vines would never get to the stage where they climb the adjacent fence as when the heat of summer comes the vines would be scorched off, having very little root to draw water from.  I’ve found that when I pull these plants from the cracks they have enough of a root structure that they can be transplanted into the planters which, once proven, will make their way to the base of the wall.  It takes a special kind of will-to-live to spring up in a crack and I’m counting on that same vitality that nature has in spades to be put to use to improve my neighbourhood.

In Montreal, the rage in community gardens is to add a chicken coop.  In a recent newspaper article, I learned that Rosemont borough is adding a coop for 5 chickens. Sometime in September they pass the birds back to the chicken farm from whence they came as the article assured readers that no chickens would be “abbatu” (killed) that are kept in these community coops. And there I was getting hungry for some local chicken.

It was my Plateau borough that started the chicken-coop-in-community-garden rage but the 5 chickens WE have don’t put out enough to provide me even with one egg per year. Do they do this sort of foolishness elsewhere or do you have to live in a really big city that is really detached from agriculture (& polticulure?) before this kind of thing makes sense?  My pioneering Plateau borough had to first get the borough council together to work around existing by-laws that said “you shall not keep chickens in the city” and then they probably had to decide how many chickens they would allow to co-habitate and under what living conditions.  5 birds was likely the level where ammonia levels would not affect the health of the chickens or offend neighbours living too close to the community gardens (wouldn’t want to turn that plus into a minus).

The above pictured chicken coop is the beautiful photography of my friend, Jane Andres, in Niagara-on-the-Lake, Ontario.  Jane has been known to slip me a dozen eggs (including some cute, bluish green ones) when I make my sausage deliveries.  Of course, by the time I drive 7 hours back to Montreal with my eggs (and other Niagara region treasures-in-food) they don’t have the local food group seal of approval.  But to my mind, they still taste pretty good.  I can only politically-incorrectly imagine what one of those hens would taste like.  Mmm.