I strongly believe that the Bible was written by people. Today I want to consider a very well-known passage in the gospel of Luke which includes the 3 main characters in my blog title plus some heavyweights that I left out (angel of the Lord, Mary, Joseph). Luke’s purpose in writing his account of Jesus is to give certainty to the believers about the things they have been taught (Luke 1:4). He does this by consulting eyewitnesses and writing the story in greater detail than we have in any of the other three gospels. 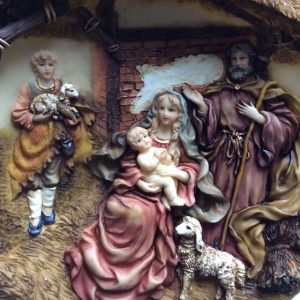 There are details of Jesus’ story that only Luke has: an angel choir appearing to shepherds to announce the Saviour’s birth and the angel of the Lord giving instructions that they will find this Saviour, newly born and wrapped in swaddling clothes and lying in a manger. God, who is in control of all things, could have arranged that an angelic choir-backed birth announcement be staged somewhere that would have a bigger audience – the temple in Jerusalem comes to mind. If Luke were making this up this kind of setting would have been more spectacular, of greater import.

Sheepherding was not a respectable occupation, yet God either ignores things like societal status or, perhaps actually prefers communicating with those humbled into doing lowly work. David, the greatest of the kings of Israel, learns everything he needs to know about God while tending sheep. Here we are, back where God chose David – Bethlehem, the city of David (Luke 2:4). Here is born a worthy successor in David’s line, but in this coming as Saviour it is announced to the most humble. This is the Most High who has angel armies (and choirs) in his command. A birth so humble that only God could, only God would choose to be among us as a humble servant. 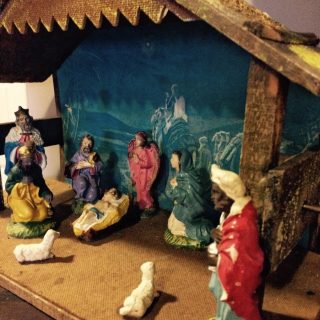 The family manger scene that we had in our family (pictured to the right) received a lot of attention as little hands loved to wind up the music box attached to the stable structure and listen to it play ‘Silent Night’.  This amazingly durable piece of workmanship was made in Italy and must be well past 50 years of use.

It was in Italy in 1223 where Francis of Assisi created the first ‘presepio” (manger scene, or crèche).  He recreated the scene with living animals so that people would refocus on the meaning of Christmas and could picture this ‘Holy Night’ when God became flesh.